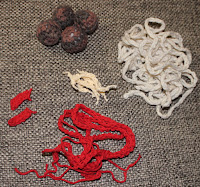 And the cheese?  Those were the questions I got this morning as play began so we conferred, I got red and pale yellow cotton yarns upstairs so I could crochet long red chains like spaghetti noodles with sauce, short pale yellow pieces of cheese, and then he wanted a couple chunks of tomato to go with it all.  How long will I be able to crochet my way to satisfying a small assistant?  Probably not long enough for me but enough for today.

It was snowing when I woke up this morning.  Ugh.  As if last night's rain wasn't enough we had to have snow.  It really didn't stick to the streets and it was warm enough that it wasn't slick, then the sun came out this afternoon to melt the snow.  Small mercies. 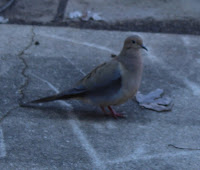 Mourning doves came to walk around on the patio after the snow had melted, pecking at nothing, and cooing to each other. 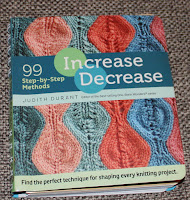 I got an email from Amazon last week that I had a $20 credit for some reason, spending a not huge amount of money by a certain date, so I ordered a knitting book I've been wanting.  It came today.  Mysteries like "purl through the front and back" which I can never figure out are explained.  Knowledge is a wonderful thing as are reference books.


Det. Archibald walked through the relatively quiet squad room to his office.  He made a phone call and waited.  Shuffling reports and files he passed the time until two men appeared at his door.
“Come in, Kenneth.  That’ll be all, Officer Leason.  Thanks.”  Archibald indicated the chair across from his desk.  “Have a seat.  Kenneth, I’ve asked them to bring you up here to tell you that you’re free to go.  I’ve looked at the evidence and there’s really no reason to hold you any longer.”
“So, Det. Archibald, what changed your mind?” Edwards asked.
“Oh, a bunch of things.  Mostly the fact that you really didn’t benefit from murdering those women.  Despite what you told me all those years ago, it seems that it really was a coincidence that you were at all murder scenes.”
Edwards looked long at his old friend and student.  “You’ve got another suspect, don’t you,” he said flatly.
Archibald looked out the window and said softly, “I think so.”
Edwards was surprised at the tone of the reply.  “What do you mean, you think so?  Don’t you know?  What evidence do you have?  Blood?  The murder weapon?  Opportunity?  What?”
Archibald smiled to hear the old Kenneth Edwards come back to life.  “Now, Kenneth, you know I can’t tell you any of that until I’ve made an arrest.”  He sighed.  “Need a ride somewhere?  I can have one of the uniforms drop you.”
“No thanks, Alan.  I’ve spent enough time in a squad car the last two weeks to last me the rest of my life.  I’ll keep in touch.  And, Alan, thanks for believing me.  Not too many people would have looked past my failures of the last few years.  They’d have only seen the drunk loser.”
Archibald stood and extended his hand.  “Kenneth, you’re not a loser.  You just got off track for a while.  I’m sure you’re back on your feet now.  You were a big help yesterday.  You helped me see the truth of this case.  A truth I was too stubborn to see.  Give me a call when you get settled again and we’ll have dinner.  On me.  Now get out of here and let me get some work done.”
The men shook hands, clapped each other on the shoulder, and Kenneth Edwards turned and left the office.  Det. Archibald stood, hands in his pockets, at his door and watched the older man thread his way through the desks in the squad room and go out the open door into the hallway and out to freedom.


I started cleaning the fridge this evening.  I just did the door tonight, tomorrow I'll tackle the rest.  Man, it sure needs cleaning.  I figure I'll set myself one chore a day, leaving plenty of time for playing with hobbies.  Don't want to get too bogged down in cleaning and stuff like that.
--Barbara
Posted by Barbara at 10:05 PM

Glad you had some time with your assistant yesterday. But more snow and rain? No fair when we're stuck inside for who knows how long. Still getting out for a breath of fresh air every once in a while. Sunshine down here so a stroll around the block is a good thing.