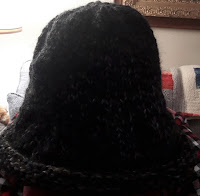 Evidently I'm clawing my way back to health or, at least, I can see being healthy in the distance because I didn't take a nap today.  I was tempted but managed to not sleep.  Makes me feel almost virtuous.


I finished knitting the felted hat.  It's a little too big (that's me wearing it so... understatement) so it's been though the hot cycle of the washer six times and now it's in the dryer.  There'll probably be more washer cycles tomorrow given how huge the hat was. 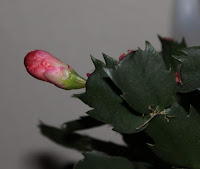 Oh, look at the Christmas cactus bud.  It's staying alive and getting bigger.  There are more tiny pink dots of buds on the leaves but no other bud seems ready to volunteer to bloom. 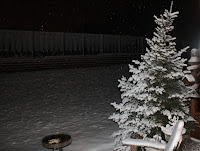 It started snowing this afternoon and looks like it just stopped.  We've probably gotten an inch or so.  I hope that's all we get.

Last week I was rifling papers on my desk and found a gift certificate to Knit Picks that I didn't remember redeeming so I went online, found some yarn that I liked, and ordered it.  It worked!  The yarn came today.  The purple with pink is called Dragon Lily, the gray with gray is called Wednesday.  I wonder who names yarn. 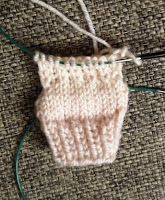 Once the hat was in the wash I realized that I didn't have anything to knit so I cast on another training sock for the Advent garland, making it through the heel flap.


It was George and Dimitri’s turn to organize the snorkelers’ monthly activity.  As the newest members of the group, it fell to them to plan the activity and get the information circulated.  They emailed each other and searched forums on the internet.  George got a chuckle when Dimitri wrote that he thought that they should go to a whole other island for the next meeting, just to get out from under their wives’ scrutiny.  George wrote back that he thought that was a good idea and suggested that they meet for an early morning breakfast at the Rose Inn the next day to plan it.
Dimitri arrived first and was seated at their usual table with two mugs and a pot of strong island coffee already there.  “I did not mean it really, George,” he said as George sat down next to him.
“I know you were making a joke, Dimitri, I’m not that old, but I think you might be onto something.”  George picked up the carafe, poured himself some coffee, and refilled Dimitri’s mug.  “After I got done laughing at the idea I realized that it was perfect.  Have you noticed that Franz isn’t running his inter-island ferry lately?”
“I saw it tied up at the customs dock the other day and wondered what it was doing there.”
“He’s had to have some heart surgery and his son, Davis, didn’t want to let Bunny and his Rasta pals run it while Franz was laid up.  He plans to start it up again in a few months when he’s back on his feet and the docs say he’s clear to work.”
“What does the fast ferry have to do with my idea?”
George drained his mug and refilled it.  As he did their young waitress came and took their orders; both of them still got a lot of pleasure out of ordering eggs and sausages and fried potatoes, flaunting their wife’s orders.
“So, what is your idea, George,” Dimitri said.  “Don’t keep me in suspense.”
“Well, I was thinking, why don’t we rent the ferry to take us all over to Arowak Island to snorkel and dive for the day, have a big beach barbecue, snorkel some more, and then come home in the evening.  Make a real day of it.  That boat of Franz’s is really more of a big pleasure boat than an official ferry.  It would work great as a floating dive platform.”
Dimitri was silent.
“Well?  What do you think?”
Dimitri laughed and clapped him on the shoulder.  “I think that is a capital idea, old chap.”
George threw back his head and roared with laughter.  “I’ll give Davis a call and see about setting it up.  We’ll have to make sure there’s a spot on the leeward coast of the island so that we can pull in close enough to offload the food and such without damaging the reef.  I’m sure they sell charts at the Harbor Village Marina; I’ll stop there on my way home and pick one up.”
“You had better wait until we know we can rent the ferry before you go buying charts.”
“But now that you’ve had it, I want to get this idea moving.  You’re a bad man, Dimitri Roskova; you’re going to land me in big trouble yet.”
They both laughed at that and tucked into their platters of eggs that the waitress had just set down in front of them.


I absolutely detest having a cold.  That is all.
--Barbara
Posted by Barbara at 9:20 PM 1 comment:

I decided to give in to the cold so I spent today napping and knitting on the couch.  I think it got into the mid-forties outside today but I didn't have enough energy to even get dressed much less put on shoes.

It was so gray and dreary today that the automatic nightlight in the bathroom never really turned off but at sunset the sky across the street turned that amazing pink/peach/orange that gets me off my sickbed (sick-couch?) to snap a photo.

Like I said, I knitted between naps and got to the crown decreases.  Hooray!  There are five more rounds to go before time to weave in ends and get it felted.  I'll be very glad to have it done.


The day that Sonia and Harriet decided to go downtown to cruise the shops was cursed.  Everywhere she turned Sonia saw one of Irina’s groupies.
In Malabar there was a trio of the women who made certain to sit around Irina at Literary Roundtable meetings as if it were their job to cordon Irina off from attack.  Sonia thought of them as Larry, Moe, and Curly, the Three Stooges of the expatriate women.  They were Polish and evidently felt some sort of loyalty toward one of their former oppressors. As soon as they spied Sonia they stopped talking and crossed their arms across their not inconsiderable chests.  Their glares followed Sonia around the store as she and Harriet flipped the racks, discussing which of their daughters, daughters-in-law, and granddaughters might like what they were seeing. It was no better in Littman’s; at least one of Irina’s supporters was in Littman’s jewelry, Littman’s upscale gifts, and Littman’s touristy gift shop.  Littman’s had covered all the bases to serve the needs of each and every visitor to the island not matter what their economic status.
Irina herself was in Mama Vita’s, the bargain clothing store at the end of the street.  Mama Vita’s was just too small for the three of them to be in at the same time so Sonia pulled Harriet back out onto the street and across to Island Fashions saying, “She won’t follow us over here.  I understand the Russians’ pension is barely enough to survive on much less shop here.”

Harriet kept her mouth shut for once and just nodded.  She had never seen Sonia like this.  The Sonia she had lived next door to for years had been a tolerant woman who tried her best to be a friend to everyone.  Harriet didn’t understand what was so bad about the Russian woman and her husband, she thought they seemed all right, but she wasn’t stupid enough to say that to Sonia.  She had made up her mind to hate Irina and Dimitri and that’s all there was to it.


Along about mid-afternoon I realized that I was going to live even though the cough is rearing its ugly head.  Time to trot out the cough syrup.  It's supposed to start raining around 3am and then get colder and turn to snow.  Yippee.  Rain into snow is a deadly combination.  Good thing I don't have to go anywhere for a couple days.
--Barbara
Posted by Barbara at 9:39 PM 1 comment: 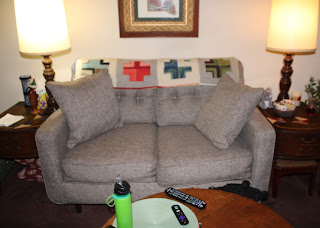 ... was sit or lie on the loveseat (good thing I'm short) trying to figure out a way to get my sinuses to drain so that I don't feel like the inside of my head is bigger than my skull.  That was my whole day, except for a few short naps and knitting a few rounds on the felted hat.


Max wasn’t kidding when he said he wanted to dive his brains out while he was in Bonaire, George thought.  Every morning Max was at George’s door, dive bag in hand, ready to drive off and explore another pair of dive sites from shore.  They lucked out and in the second week of their visit the tradewinds dropped off for a few days allowing them to enter the water from shore on the windward side.  It was a different world there where the waves usually pounded the ironshore and burst into the sky in an explosion of foam.  Giant sea fans as tall as Max waved in the current and schools of silver tarpon twenty or thirty strong patrolled the drop off.  George was amazed to see that the gray vase sponges that grew round and narrow on the leeward reefs spread out across the current like fans with only a slit for the outflowing water to pass through.  He supposed that the little sponges weren’t up to the struggle of holding themselves open with the weight of the current pressing against them so they expended their energy growing to the side.  Max was always ready to tackle the most challenging conditions.  He didn’t care if waves dashed him around and tumbled him as if he were in a washing machine, he wanted to dive every inch of shoreline from Playa north and south and all the way around.  George had little luck dissuading him from driving them to Boca Onima up by the Indian inscriptions and insisting that of course it was safe for them to time the waves and enter the water between them, riding the surge out beyond the break.  George wasn’t too happy about Max’s idea to jump off the cliff at Rappel and drift up the shore to Karpata or Old Blue either.  Now that he was retired George thought he’d like to spend most of his time in calmer water, not battling surf, surge, and punishing rocks.


And that was it.  Not very interesting but it was all I felt like doing so that's what I did.  Drank egg drop soup, ate vanilla ice cream, drank a lot of water, sucked lozenges, and snorted nasal spray.  Woo, riveting.
--Barbara
Posted by Barbara at 9:24 PM 2 comments: