Those are today's flower colors--yellow and orange.  I feel like I'm boring you to death with pictures of flowers every day but there's really nothing else going on around here.  I'm happy to report that I'm wearing the dress I made out of a tablecloth last summer that shrunk in the washer so that it didn't fit for six months but it fits now.  Positive proof that all of my cooking and portioning and logging food is paying off. 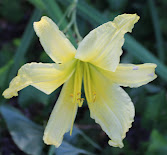 The pale yellow day lily bloomed again today.  It seems to bloom every other day.  Maybe it needs that break in there for a rest? 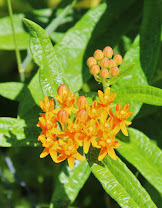 The orange butterfly weed is still blooming away and I still haven't seen a butterfly anywhere near it.  I should look it up to see what I'm missing.

And the honeysuckle is blooming a little bit again.

The hummingbird came to visit it and stopped at the feeder long enough for me to snap a picture.  Finally.

Black-eyed Susans are starting to open along the side of the house.
31 July--Barbara Malcolm, Better Than Mom's

She saw her neighbor in the hall as she left for the diner the next morning.  The woman was frog marching a young man Fay assumed was her son down the stairs all the time lecturing him on how important it was to get an education.  When they got outside Fay saw that the woman was carrying a backpack and did not let go of the boy’s arm.  She propelled him to a rattletrap sedan, shoved him into the passenger seat, got behind the wheel, and drove away, giving Fay a terse “good morning” as she went past.

“Good morning to you, too,” Fay said to the one working brake light as the sedan slid past the stop sign on the corner.

Fay kept an eye out for the woman’s car in the lot and when she saw it, she sat on one of the benches outside that evening to try and meet her.  “Hi,” she said when the woman she had seen that morning came out into the twilight with a book and can of soda. “Come sit by me.”

The woman looked at her suspiciously, took one step toward Fay and said, “Why?”

Deciding that honesty would get her farther with this lady than some fantastic story, she said, “Because I am new in town, my car is in the shop until I can make enough at the diner to ransom it, and I need a ride to the mall to get some things.  I see you have a car.  I will pay for gas if you will take me.”  She stopped talking.  “Oh, my name is Fay.  What is yours?”  She held out a hand.

“I am Naomi.”  She slightly raised her full hands.  “Sorry, let me sit down and we can shake if you want.”

“Whatever.”  Fay moved over to make room.

“Hell, I am not that wide.  You do not have to perch on the edge to give the fat woman room.”

Fay’s hands flew to her face.  “Oh, I did not mean anything.  It is just a reflex to slide over when I invite someone to share my bench.  At least you have some padding; my ass is so bony I get bruises if I sit too long.  No offense meant.”

Naomi sat down and put her book and soda can between them, then folded her arms across her chest.  “Now, you need a ride to the mall?”

“Well, at first, because you have a car that runs.”  She looked at Naomi who was staring off into space with a slight frown on her face.  Fay got the distinct impression that the other woman’s bullshit meter was switched on and working overtime, so she kept on with the truth.  “Then I realized that the way you were talking to your…son?”

The other woman nodded.

“Your son, that you were just the kind of woman I needed to meet.  Someone who values honesty and does not take any crap off anybody.”  Fay stopped talking and let the silence between them stretch out.

Finally, Naomi turned to face her.  “Most people think women who live in a place like this are tramps, whores, and thieves.  How come you do not?”

Fay reached over and patted her on the elbow.  “Honey, I have lived in places like this my whole life and I have never once been a tramp, a whore, or a thief.  Well, on second thought I might have had a few tramp-ish times in my life, but not recently and not so you would notice.”  She noticed that Naomi’s arms were not folded quite so tightly.  “I know all about wanting to live in a better place and not being able to afford it or get to it or find it or, worse still, not being allowed to leave a bad place.”

“So,” Fay said, “I thought you and me might have something in common.”

“My boy Marcus is fourteen.  He thinks he is a man and wants to lay around and do what he thinks men do, which is not work and drink and carouse all night.  It is all I can do to keep him in school and out of trouble.  I can not find a job that would let me keep track of him, so I am still on welfare.  And I hate it.  I am glad my mama has passed.  She would paddle me good if she knew.”

Today's toss was the apple coring and peeling machine that someone got for Durwood for Christmas years ago.  He was a real lover of gadgets but only used it once.  Because I put it away and out of sight, out of mind.
I concentrated my knitting time on the #%$&* Hawk's Wing shawl today, going so far as to knit on it at Zoom Friday Night knitting, which meant more focus and less talk.  I have two rows of pattern and four rows of garter stitch left to do.  I'll be very glad to be done with this and will pick something simpler next time.  Something that requires less thinking.  Thinking isn't my strong suit lately.
--Barbara
Posted by Barbara at 9:44 PM 1 comment: 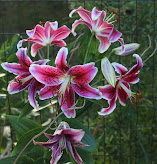 Today we have lots of flowers.  Nothing new but flowers I couldn't resist taking pictures of again.  First of all, best of all we have the Stargazer lily.   There's only this one plant left but it has at least a half-dozen blossoms on it, and the fragrance is strong and sweet.

In less durable lilies, this day lily is a pale peachy orange with a yellow center.

The purple coneflower or echinacea are blooming away.  I was struck by this one and the spurts of orange around the center. 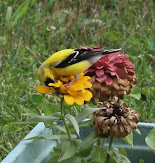 This goldfinch found the fast-fading zinnias today and enjoyed nibbling on the petals.
30 July--Barbara Malcolm, Better Than Mom's.

She did not have a television or a radio so she opened her windows and listened to the music of her new neighbors while she moved around her tiny apartment wiping down everything she could reach with one of her new sponges and her new saucepan filled with hot soapy water.  She used colorful sarongs from her suitcase as temporary curtains and resolved to get acquainted with someone in the building who might own a vacuum cleaner.  She also wanted to walk down to the mall past the garage after she got off the next day.  Surely there would be a dollar store or maybe a Kmart where she could buy a mattress pad and some inexpensive sheets so she could sleep in the bed like a human.  Fay had turned the mattress over hoping to find the cleanest side but, no matter how she turned it, it still looked like someone’s dog had lost its dinner on it.  That is what she told herself, that the stains were the fault of an accident-prone dog with an upset stomach.  If she let herself imagine what humans would have had to do to make those stains on the mattress she would never get to sleep on that bed no matter how many layers of plastic and fabric were between her and it, just like The Princess and the Pea, her all time favorite fairy tale.

She had always thought she was a princess who had accidently been born into a commoner’s family.  How else to explain her desire for pretty dresses and sparkly jewelry?  Fay was good at walking in high heeled shoes the first time she tried on her mom’s red ones when she was six.  Even though the shoes were way too big for her and scuffed across the floor, Fay did not lose her balance or have to hold onto chairs and tables like her cousin Mildred did.  But it stood to reason that someone named Mildred would not be good at walking in high heels, even if she told everyone to call her Millie.  I mean really.

Fay slept well in her new place.  She locked the door, slid the chain in the slot and closed the deadbolt; there was no reason to be careless in a new place.  She also closed and latched all the windows, even though she was on the second floor and could not see how anyone could climb up since there was no balcony.  The lack of a balcony almost made her refuse to rent the apartment.  Everyone knows that a princess had to have a balcony, but she had come to her senses and realized that no balcony and a one minute walk to work every morning beat a balcony and having to slog home a half an hour or more after spending the day on her feet waiting tables hands down.

I spent some time this afternoon working on a small scene for Better Than Mom's.  I'm still trying to figure out how to end the thing but don't worry, there are lots of pages between now and when it ends so I have plenty of time to work it out.  (she says hopefully)
Today's toss was the last case of booze from the basement.  I know it's sacrilege but I won't drink it and didn't know anyone to give it to.  Nobody I know drinks much anymore.  I sure don't.  I never ha a head for spirits and still don't.
One cool thing that happened today.  I read the comments on a FB post of a high school friend only to find another high school and college friend so I sent a friend request and have already heard back.  Nice to be back in touch.
--Barbara
Posted by Barbara at 9:58 PM 1 comment: