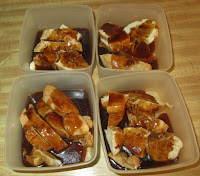 I paged through some WW cookbooks I haven't looked at in a long time and found a chicken recipe that Durwood used to make--Hoisin-glazed Chicken.  It sounded so good that when I went to ALDI for fruit I nabbed a package of boneless, skinless chicken breasts and made it.  It smelled so good and will taste even better when I have some tomorrow for supper when I'll make some cauliflower rice to go with it.  I also slow-cooker-ed the rest of the breasts to cube and freeze in two-cup packages for chicken salad or another recipe one of these days. 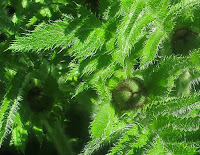 The poppy buds are just barely poking out of the whorls of leaves.  Pretty soon they'll split and the red-orange petals will wave in the breeze for a couple days.  Not opium poppies, just plain old poppy seed poppies like Grandma A used to grow. 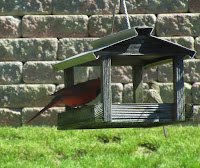 This cardinal visits the feeder most days.  He tolerates the house finches sharing the feeder with him most days but not any other birds.  Oh! I meant to tell you that the tiny wren doesn't like the chipmunk climbing up into the platform feeder and dive bombs it so that it scampers back down to the ground and runs off.  I like that wren.


It was a school of boga. From the shore it looked like a large cloud shadow shifting over the sandy seabed, but once Manning was underwater and swimming out toward the drop-off, he could see the fish. A school of silver fish, each about six inches long, was flashing like falling coins in the tropical sun. The colors shifted from white to green to blue with the angle of the school.  They moved with a frantic energy like predators were nearby. He hung there nearly hypnotized by the flickering fish, startled when a barracuda nearly as long as he was came knifing through the blur of boga, trailing scales like glitter in its wake.
Manning folded his arms across his middle and made himself as streamlined as possible. Periodically he checked his compass to make sure he was swimming in the correct direction, and he glanced at his depth gauge, so he didn't miss Santiago's landmark. Bubbles spiraled up as he laughed at himself. Landmark, ha. He wondered if something could be called a landmark if it was underwater. His blue eyes darted from the reef passing on his left looking for the "you can not miss it" stand of stag horn coral tangled with lush yellow tube sponges that, according to Santiago, marked the edge of the shipwreck, and the deep dark blue of the open ocean on his right. He had dived these waters many times without incident but there was always the chance of something coming out of the abyss.

Tonight's movie was Indiana Jones and the Last Crusade with Sean Connery.  Oh my, he's good looking, better looking than Harrison Ford, IMHO, but I wouldn't kick either one out.  Today was a droopy day, except for that trip to the grocery, but tomorrow will be better I'm certain.  I'll take a walk which will help.  It was so chilly in here this morning that I had to turn the furnace back on but by Tuesday it's supposed to be in the high 80s.  This weather is just not fair.  Up down hot cold, it's a wonder we don't all have colds, but then we're all staying apart so who would we catch one from.  Crazy days.

My prompt writing went a little better today and isn't quite as terrible as it has been the last couple days.  Whew.
--Barbara
Posted by Barbara at 10:34 PM 1 comment: 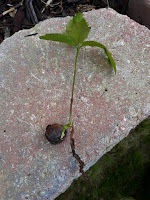 I spent most of the day weeding the top of the 110 feet of retaining wall, the part of it I can reach anyway.  One of the things I weeded out was a tiny oak tree with the acorn still attached.  I was surprised because the leaves weren't oak tree shaped yet.  It was the perfect day to be out weeding, sunny and cool with a little breeze out of the northeast (so no Burger King temptation floating by).  I think the only way I'll be able to finish the weeds will be to go to the end of the wall and walk on top of it so I can uproot the weeds nearest the fence.  Don't worry, it's at least three feet wide so I won't be tightrope walking to do it. 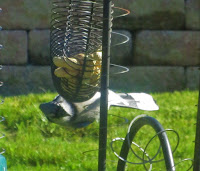 I filled the bird feeders yesterday and this bluejay stopped over to acrobatically nab a peanut.  It was fun to watch because the bird started by standing on top of the wreath, hopped into the center, and finally ended up hanging nearly upside down but it eventually got a peanut and flew off.  It must have decided that was too much work because it didn't come back. 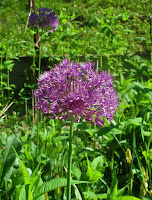 Now the alliums in the back garden are blooming.  I wish you could see the flowers close up.  Each red-violet floret has a green center that's very striking. 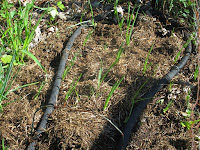 Today you can really see the onions sprouting in the mulch/bale.  I'm ecstatic that so many of them are up and making green tops.  Maybe I'll actually have some to harvest that are bigger than a ping pong ball.


Deep under the water the treasure laid waiting. Waiting for hands to take it up, to pull it into the light and air after centuries spent on the bottom under a pile of timbers. The sea had done its best to claim the treasure for its own. Queen angelfish hovered over it, delicately nibbling on the algae-filled coral polyps that obscured the outline through the years. In a very short time, the human taint was diluted in the sea. All that remained was the cold metallic tang and the sharp sap of the planks crushed by being driven onto the reef by a long-forgotten storm. Silver blackened and welded together by the saltwater held the shape of containers long dissolved or rotted away but the gold lay as yellow and gleaming as the day it was smuggled aboard.

It was quiet down there, peaceful. Not silent, not by a long shot, but different sounds from the regular everyday ones. There was no traffic, no ringing buzzing tootling phones, no voices of any kind. It was restful to ears jangled by the escalating buzz of modern life to wade into a blood-warm sea and submerge to spend an hour neutrally buoyant, unencumbered by gravity's demanding pull. The Darth Vader whoosh-click of his breathing fades as his vision soars, strains to pull in every color, movement, and shape. It is peaceful spending time in a place where the rocks are alive, the plants are animals, and the only soldiers are six-inch-long red fish that roam the reef at night.
Glint of gold. It caught his eye as Manning swam down the reef. He stopped and finned nearer, only to find it was a broken bottle glittering in his light. The pale glow of the moon lent its cold light to the warm beam in his hand as he swept it over the reef. Looking for the clues, the markers Santiago claimed were there, made Manning's heart rate slow. He knew that even without the treasure the Venezuelan swore was there for the taking, that he had all he needed to keep Jack on the string long enough to part him from a good bit of his money. Many fools like Spencer who imagined they were smarter than Manning had come to regret it.
But the treasure was less than a hundred yards away in the sand between the first and second reefs.

I slacked off daily writing in May and can I ever tell.  The last couple days I've done a prompt exercise and both of them are horrible, terrible, no good, very bad things but I have faith that if I keep it up my brain will eventually turn back on.  I hope.
--Barbara
Posted by Barbara at 10:04 PM 1 comment: 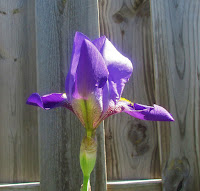 I remember when the iris bloomed in the spring Grandma called them flags.  I don't know where that came from but they sure are pretty.  This is the first blossom of the ones that CG planted atop the new retaining wall.

The lilies of the valley are in full bloom too so I picked a few of them so that I could enjoy them and their sweet fragrance.

Knitting a few rounds a day has produced slow and steady progress on the Slip Stitch Hat,

and the fourth Stuck-at-Home Warshrag is growing quickly.


You must dive Red Slave at dawn if you don't have a boat. And even if you do have a boat, dawn is still the best time because that's when currents run slowest. Red Slave is a collection of huts at the extreme southern end of the island and currents run strong, so strong that what anywhere else is a gray vase-shaped sponge grows in a flat fan-shape offshore of the Red Slave huts. There's a lot of detritus around there, mute evidence of just how challenging it is to dive there. Broken fins lay where desperate divers flung them onshore anxious to lighten their burden as they stagger and struggle through the building waves to the safety of shore. If I wanted to dispose of something, this is where I would do it, Manning thought as he sat waiting for Santiago’s boat to appear on the horizon
Trying to walk in the sandy places in the shallows he moved out of the cleft in the ironshore rocks and shone his flashlight at the white fiberglass boat purring on the horizon. Ready with a story in case the dawn light was playing tricks and instead of Santiago in the Santa Rosalia the boat carried the Coast Guard or worse yet the fish police, Manning thought about how he had gotten into this mess. His whole life he had attracted a, let us say, more interesting class of people. His mother, his social-climbing, money-loving mother hated his friends, forced him to live his life in the shadows to avoid her disapproval. A sly smile lifted the corners of his mouth when he saw the flash of Santiago's smile when the Santa Rosalia reached the edge of the drop-off. Manning waded out, swimming the last few yards. He slipped over the gunwale like an eel, pulled the zippered plastic pouch out from under his shirt and counted out the pile of guilders.
"I said dollars," Santiago said, his smile draining away from his eyes and lips.
“You want me to explain to the bank manager why guilders are not good enough? 'Dollars are what smugglers want, sir.' Yeah, that would be great." The hard light in Manning's icy blue eyes stopped Santiago's complaint.

I mowed the lawn this morning.  The only problem was that I'm downwind from Burger King so every time I turned that way the aroma of grilling burgers overtook me.  Almost made me hop into the car and go get me one, but I resisted the temptation.  It's too close to Monday (weigh-in day) to be scarfing down a cheeseburger, besides I had a McDonald's Frappe yesterday while I waited for Goodwill to open so my weekly splurge was already splurged.  Maybe I'll get a burger on Monday.
--Barbara
Posted by Barbara at 10:00 PM 1 comment: