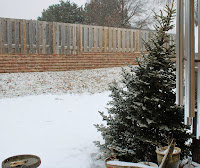 Yesterday morning around 11 o'clock I was surprised to look out the window to see snow falling--and not just a flew flurrying flakes, but real snowflakes falling in close order.  The snow covered the exposed grass but melted on the pavement.  By suppertime it was all gone again.  It's supposed to snow and/or rain tomorrow, be bitter cold on Friday (thank you, high pressure ridge that's dragging arctic air down from Canada), and then hit 50 or maybe even 60 by Sunday.  This weather is bonkers.

Remember last week when I baked bread?  Well, the two (not new) bread cookbooks I ordered while the dough was rising came.  I can see myself making a lot of the breads in the Healthy Breads book and a few of the Pizza and Flatbreads recipes.  I almost bought another bag of bread flour, yeast, and vital wheat gluten (don't ask what it is, I'm not sure, but the new bread book says it helps whole grain bread dough rise) at the grocery the other day but I held off until time to bake again.  I may need to develop a list of people that I can give bread to so that I don't have to wait until one batch is gone before making another one.  Hm, I wonder if the renters eat bread...

You know, if I wasn't knitting these pillow squares in stockinette (knit every round) and had to purl every other row, this would be in the bin.  Or frogged and the yarn earmarked for another project.  A sock, for instance.  It's picking up stitches on the last square and then casting on a bunch of stitches using the reverse loop cast on that's making me crazy.  That reverse loop is the devil to keep from twisting around the needle and hard to slide the needle into to make a stitch on the next round.  I'm keeping going because I'm stubborn but it sure is frustrating.  I like the yarn though.

It was just after 10:30 PM Monday, June 14 when Kenneth Edwards called the police to report Teddy’s murder.  He’d been dumpster diving down the alley behind the shelter when he heard the struggle and went to investigate.  Unfortunately, the alley wasn’t lit except by a streetlight at the end so he couldn’t see what was going on.  With the arrival of the crime scene crew, strong lights bathed the area in intense illumination.  Again, there were the flashes of the photographer, everyone was in gloves.  Again, Archibald and Graybow got the call.
After completing his examination of the body, the coroner pulled Archibald aside to give his preliminary report.  “Well, it’s the same sort of wound as the two before.  Right at the base of the skull, clean and neat.  Wish I knew what the killer used.  There was a chip of some grey flint in the last wound.  Maybe I’ll find the same here.  Death was instantaneous.  There’s a bruise on the side of the head.  Looks like there was a struggle this time.”
“Find anything else?  Anything that would help us identify the killer?” Archibald asked hopefully.
The coroner sounded defeated.  “Nothing.  No prints, no weapon.”
“Man, what’s with this?” Archibald exploded. “Three murders in less than two weeks!  I thought that tennis guy killed the Neal woman, but his blood didn’t match the drops on her dress.  It has to be the killer’s blood.  All young women.  All popular and well known in town.  Wonder what ties them together?”
Hopefully the coroner remarked, “There is a witness this time, you know.”
“Witness?  Where?”
The coroner pointed.
“Edwards!  What the hell are you doing here?  I thought I told you to stay out of trouble.”
Edwards shook his head.  “Detective Archibald, I’d give anything not to be here.  I just happened to be down there looking in the dumpster behind that little grocery and heard a fight.”
“What’d you hear?”
“Well,” he said carefully, “I heard a shout and then what sounded like bodies crashing around into things.  You know, cans and such.  Then a big bang like something hit a dumpster, then nothing.”
“See anything?”  Graybow asked, holding his breath.  This could be a break.
“Not much really.  It’s pretty dark in here.  And they were behind that dumpster next to the shelter’s back door.  I just saw a person running.  Down the other end.”
“Man or woman?”
Edwards took his time answering.  “Not too sure.  Might have been a woman.  But like I say it’s dark, so I can’t be sure.”
“What did you do?”
“I shouted, “Hey, what’s going on?” you know, thinking I’d stop a fight or something.  And then the lady took off running in the opposite direction.”
Eagerly Archibald pounced, “Now you say lady.  Why?”
“Well, she ran like a girl.  You know, elbows out...and, oh yeah, she had a purse.”
Graybow asked, “A purse.  Couldn’t have been the victim’s purse?”
Edwards quickly responded, “Nah, Teddy never carried a purse down here.  Briefcase neither, in case you were gonna ask.”
“Then what?”
“I ran down here and saw Teddy lying there and called you guys.”
Archibald looked up and down the alley.  “Where’d you call from?”
Edwards pointed.  “That little Asian restaurant on the corner.  Mr. Moua’s a real nice guy.  Saves leftovers for me sometimes.  Anyway, he was still open, so I used his phone.  I knew Teddy was dead.  She didn’t need me to stay with her,” he ended sadly.
The detective was tired and confused by this string of murders.  Frustrated that he couldn’t find the thread that ties them all together.  He was convinced that they’re related.
“And you stayed to wait for the police to arrive.  Edwards, you’re either innocent or stupid.  It looks bad, real bad, that you were at all three murder scenes.  I think we need to talk more about this.  Why don’t you spend the night with us again and we’ll go over the whole thing one more time?”
Kenneth Edwards resignedly held his hands out for the cuffs.

I went to write with ACJ this afternoon but we ended up talking about writing instead of writing writing.  That's okay.  I wasn't clear what I wanted to write so we just talked about it and many other things.  It was a nice afternoon.  Girl Scout cookies came.  I should have just donated the $20 to the troop and skipped the cookies.  I am powerless in the face of cookies.  Peanut Butter Patties are my nemesis.  Arrrgh!
--Barbara
Posted by Barbara at 8:45 PM

Winter just will not give up. But it sounds like this is just a short visit. Bread is the staff of life so if you put the word out, you'll have people lining up to receive any you're willing to share. I know I would. Who carries a purse to a murder? Hmmmm! Is there a clue there?