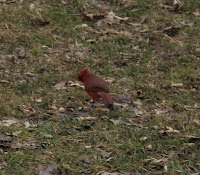 This morning a cardinal came to have a drink and then hopped around in the grass and on top of the fence until his mate flew by and off he went.  He made me think of spring. 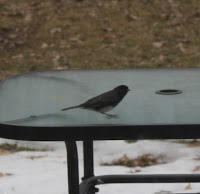 Then a junco landed on the patio table reminding me that this is Wisconsin and spring might tempt us with balmy temps and rain but it's really still winter.  Juncos fly down here from the arctic for the winter and go back in spring.  They're still here.


I did see a small V of Canada geese flying north while doing yoga this morning so I got mixed messages from the birds.

It started raining just after lunch today and it's still raining.  I am in fear that it'll get cold quickly and all of this rain will turn to ice.  I don't want that, nosiree bob.  I hate icy streets.


I went to the Y in the late morning to do 20 minutes hiking to nowhere on the treadmill.  Twenty minutes isn't long but I'm determined to keep going so I'm building up slowly instead of going all out and then not going because I hurt.  I figure little bits are better than no bits.

Did I tell you that I ripped out the black mitt I started the other day because the yarn had no sproing so it was nearly impossible to work the cables?  So I searched for an easy mitts pattern and picked out easier-to-use yarn to make it out of.  This yarn is named Donegal, has alpaca in is, and I like tweed.  Win-win-win.

Taking a deep breath Sheila asked, “So, did you know Tiffany Davis, Kimberly Neal, and Theodora Allgood, the three young women killed over the last few days?  It’s all over the news.  I’ve been following the story in the newspaper.  I was thinking you might know them since they were all about your age.”
“Actually, I did know them.  They were part of the squads my mother coached.  In fact, the three of them were her favorites.  “The Y’s”.  I haven’t thought of them in years.”
Sheila was surprised, “They were “the Y’s”?!”
“Yes.  I started calling them “the Y’s” in high school.  All their nicknames end in Y and they were always together.  All through school they were inseparable.”  Marlene’s voice hardened again.
“Since you knew them, do you have any idea why anyone would want to kill them?   Have the police contacted you?”
“I haven’t thought of them in years, as I said.  They were so irritating when they were young and never really grew up.  I guess they just irritated someone into getting rid of them.  And, no, the police haven’t contacted me.  I haven’t seen or had contact with them since my mother died,” she said with finality.
“You seem like you’re still angry about them though.”
Marlene sighed with exasperation at the direction the interview was taking, “Well, they were held up to me by my mother as paragons of young womanhood (her words) and I guess I saw them as symbols of my failure in my mother’s eyes.  They were always what my mother wanted me to be and she was too stupid or blind to see that I had other more valuable qualities.  They were more like her.  She smothered me to mold me into her image of her daughter.”
“It seems to me that you’ve never really gotten over resenting them.  You can’t really blame them for the way your mother treated you, can you?”
“You bet I can!” Marlene retorted.  “Their constant presence in my life and home was a continuing irritation to me.  Parading around in their tight sweaters and short pleated skirts!  So sure of their allure, so confident of their fitness for anything life threw at them.  “Just give me a tube of Passion Pink lipstick and I’m set for life!”  That was their motto.  And look at their lives!  Tiffy married Dirk, a big football success until he hurt his knee, had a wildly successful flower business.  Oh, excuse me, a floral boutique.  Kimmy married Dwayne Neal, son of the owner of the biggest paper mill in town.  She and Dwayne flew all over the world playing with “the beautiful people”.  And Teddy.  Little “gift from God” Teddy.  She was the most successful of them all.  Walking on a beach in Barbados she meets the son of the Duke of Buford, Lord David Allgood, marries him after a whirlwind courtship, he dies tragically on the ski slopes and Teddy returns, widowed and triumphant, to Ashville to play her best role, Lady Bountiful Allgood.  Philanthropist to the downtrodden, lifter-up of the underdog.  Spreading her designer cheer and goodwill in her wake.  Who wouldn’t resent them?  They haven’t got a brain among them.  I remember one day in college.  I was in the bathroom washing my hands and “the Y’s” came in, giggling away.  I guess I rolled my eyes at their entry and Kimmy came over to me and said, (Very Valley-Girl) “Y’know, that’s really rude, because we’re not stupid or anything.”  She flipped her blond hair over her shoulder, turned to flounce away, and ran smack into a door.  I nearly choked trying not to laugh before I left the room.”  Marlene smiled at the memory of that day.
Sheila held her hands up in front of her chest, “Whoa, whoa!  Don’t get so worked up!  I just asked if you knew them.  It seems odd that three women you seem to hate have all been killed within the last few days.”
“Odd?  Doesn’t seem odd to me.  The three of them were so self-assured and self-absorbed they trampled everyone who got in their way.  I’m amazed someone didn’t take care of those three little bimbos a lot sooner.”
“The paper said they were all stabbed in the same manner.  Any opinions or ideas?”
Marlene frowned, “Why are you asking about this?  Do you have some sick connection with them?”

(Oh man, this is terrible writing.  Sorry about that.)

According to the weather guy in my phone we're supposed to have sunshine tomorrow morning and no rain.  Here's hoping it's true.

I'm so frustrated with my mail carrier.  Twice now I've had mail out to be picked up and twice he's walked right by leaving it behind.  Today he literally walked across the front of the house, not three feet from my mailbox and, I think because I didn't get any mail, he didn't look up to see my outgoing mail.  Last week I lay in wait for him to come back up the other side of the street to hand him my mail but today it was pouring rain so I left it and fumed.  I hope I get some junk mail tomorrow so he sees the outgoing mail.  I suppose I could take it up to the bank and drop it into the mailbox there... Maybe if it's nice tomorrow I'll take a walk around the block.
--Barbara
Posted by Barbara at 9:53 PM

I've decided Three Cheers for Murder is one of your very early efforts. Marlene is definitely not a happy person and I can't imagine a happily-ever-after ending for this one. Not like Horizon. That's still my favorite. Until we get the finished novel, that is. Trying to be careful and safe with all the coronavirus news. Almost afraid to go to bridge this afternoon but I plan to wash my hands before and after -- singing Happy Birthday (twice) to myself.