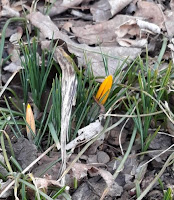 ... spring is continuing to arrive.  There's another clump of crocus starting to bloom... 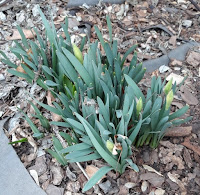 buds are emerging on the daffodils... 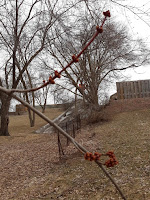 and on the neighbor's maple tree.  I could have told you that the maples are starting to spread pollen because I sneeze every once in a while for no apparent reason.

I discovered this hole in the foundation of the house.  I don't know how long it's been there or if anything is in residence.  My knitting pal, MW, stopped over today and suggested that I stuff something in the hole to see if it gets pushed or pulled out, then he has access to one-way doors to make sure it stays out (if there's a resident), and he knows what kind of cement to use to fill it in.  It's good to have friends.

I spent a couple hours today working on a manuscript.  I find it hard to focus, my mind skitters around, but I'm keeping at it.  Soon the chipmunk in my brain will slow down and get back to running the wheel at a reasonable pace.

After supper I cast on Mosaik Mitt number 2 while watching Destination Unknown on the Discovery Channel.  The host is an archaeologist/adventurer who chases legends like Atlantis, the Bermuda Triangle, and pirate treasure.  Excellent scenery and plenty of action for this armchair adventurer.


At his home, Det. Archibald wasn’t having a good night either.  He tossed and turned hearing Cecilia’s voice outlining her suspicions about Marlene Brownloe.  Could she be right?  Could an intelligent woman carry a grudge for all these years?  Could the change in her appearance signal the death of her enemies?  Is Marlene smart enough to cozy up to Graybow to pump him for information and divert attention from her possible involvement?  Archibald groaned, turned over and hoped sleep would come soon.


We decided to stop Friday Night Knitting for at least a month.  We have no control over the people using the room before us or the people shopping at Goodwill while we're there.  I hate this but it seems like the responsible thing to do in these uncertain times.  I got a call from my financial advisor today reassuring me that my portfolio has taken a bit of a hit but isn't by any means trashed.  Whew.  I have faith that what's coming down will go up--eventually.  Stay safe.
--Barbara
Posted by Barbara at 9:40 PM

Love those signs of Spring in the midst of all the mess the world has become. Looking down can have a reward when it's flowers starting to bud. I'm sure Goodwill is missing me because I was in there so much but I'm sheltering in place and trying to be a good citizen. Thanks goodness for books and TV -- and channels like History and Discovery. Anything but the news 24/7! Scary!!