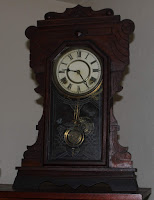 Ai-yi-yi!  I am not a fan of Daylight Savings Time.  We all know that.  And here it is again.  Spring forward.  The loss of an hour of sleep.  The disruption of my biological clock for a day or two and a low-hanging crappy mood to go with it.  Dandy.


I managed to haul my self to the Y late this morning and hiked to nowhere on a treadmill for twenty minutes.  They're rearranging and increasing the trainer area so they took out the four rear-facing treadmills I liked to use.  Now I have to get into the phalanx of other treadmill-ers and feel like they're watching and judging me.  They're not, or course, any more than I watch or judge them but, there you go, that's my loony mind playing tricks on me. I'll do it again in a couple days and put it on here first so I can't crap out. 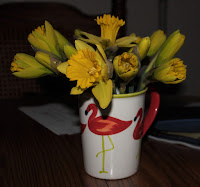 I stopped at the grocery after the Y for some oranges and treated myself to a bunch of daffodils.  As soon as I got them home and into this flamingo mug they started opening.  That's the kind of enthusiasm I like in a bunch of flowers.  They remind me of the rows of daffodils out at my grandparents' farm in Evansville, IN.  The rows seemed very long, I'm sure they were not that long, and that's where the Easter Bunny hid the eggs.  Up here the daffodils aren't blooming at Easter and the bunny doesn't hide eggs outside, even when Easter's as late as possible.  *sigh*

Instead of sitting and grousing over my pillow knitting project, I searched on Ravelry and found a pattern for a pair of fingerless mitts out of a skein of wool & cotton yarn I got from MW last night at Friday Knitting.  A lady he knows is getting out of knitting (!!!) so she gave him four big bags of yarn to keep or share.  He shared.  A lot.  I managed to only bring home five more skeins of yarn and I got started using up one today.  It wasn't until I got through the cuff that I realized that black yarn isn't the easiest to knit with unless you're sitting in the blazing sun or right under the light.  That's okay, I'll pull my warshrag out of the car door and knit on that tomorrow when I meet friends at Zambaldi for a little beer and knit afternoon.    DS brewed the beer that he made for their wedding again and called it Clan Malcolm.  It's a Scottish Ale, even I like it, and since I owe CS a beer I planned a little afternoon of beering and knitting.  This is getting to be a habit.  I'm glad.  It's a fun place, they have soft pretzels, and I get to see DS and DIL1.  What's not to love?

Marlene unlocked the door to Kitty’s Korner, raised the shades, and turned the sign from Closed to Open.  Walking back to her desk she remembered their conversation at lunch and thought perhaps she revealed too much.  By the time she was seated at her desk and had gotten settled back to work she was confident that she covered any slip she might have made in the heat of emotion.  She listened to her messages and found one from Sheila Winter from the Chamber of Commerce requesting an interview.  Marlene remembered that Cecilia mentioned that she’d contacted them asking the Chamber to compile a pamphlet featuring the specialty businesses in their little neighborhood, so she called and set up an appointment for later that day.
For her part, Cecilia had a hard time concentrating for the remainder of the afternoon.  She thought of the look on Marlene’s face when she pressed her for an opinion about the murders.  Also Marlene had started to say something else when she was talking about the person who killed the three young women.
Late in the afternoon Marlene was interviewed by Sheila Winter, an employee of the Chamber of Commerce. Sheila was enthusiastic about her job and slightly envious of Marlene’s independence.  Marlene was initially morose, giving mumbled answers.  As the interview continued Marlene became more gregarious as she realized Sheila was sincerely nice and truly interested in her and her life.
“What’s your full name?” Sheila began.
Quietly she replied, “Marlene Antonia Brownloe
“How old are you, Marlene?”
“27"
“So, how did you get into the book business?”
Marlene answered diffidently, not so sure she liked being quizzed like that.  “I inherited the store from my mother.  I’ve always lived upstairs.”
Sheila’s voice sounded envious.  “Didn’t you love growing up in a bookstore?”
Dismissively, Marlene replied, “Not really.”
“But you had instant access to so many exciting and interesting books!  Didn’t your mom order anything you wanted?”
“No. She did order tons of self-improvement books aimed at “helping” me become more like “the Y’s”.”
“What do you mean “The Y’s”?  Who’re they?” Sheila asked curiously.
Marlene sighed, “The Y’s” are three girls my mother used to hold up to me as examples of the way she’d have liked me to be like.  Tiffy, Kimmy, and Teddy were always better dressed, well-groomed and were cheerleaders my mother coached throughout high school and college.”
“Didn’t you like them?”
“No. They were and are shallow, vapid women only concerned with their looks and status in life.”  Marlene’s face became hardened and her voice tightened.  So, Sheila changed the subject.
“Where did you go to school and what did you study in college?”
Relaxing a bit at the change in direction Marlene replied, “I went to school right here at Ashville College.  I began studying botany.  I’ve always been interested in plants and herbs.  Then I became interested in anthropology, spending the summer after my junior year at an archeological dig in the Southwest.  But the next winter my mother died in an automobile accident and I had to keep the store running to be able to continue in school so I changed my major and ended up graduating with a degree in literature like so many other young women.”
“But doesn’t your degree help in your book business?”
“Yes, I guess it does.  At least I know where to look for things,” Marlene answered with a small laugh.
“What sort of books do you yourself most enjoy?”
Her smile broadening Marlene said, “I like the classics, especially John Steinbeck, travel books, and I must confess I’m addicted to romance novels.”  This last with an embarrassed smile.
Lowering her gaze to make notes, Sheila continued, “Does your bookstore concentrate on any particular type of book?”
“No, we’ve always had a broad range of books.  These last couple of years with the emergence of Internet sites like Amazon.com more and more of the business has become special orders and out-of-print searches.  I have gotten a bit of a reputation as a rare book dealer,” Marlene finished rather proudly.
“That’s nice.  Anyone special in your life?” Sheila asked with a smile.
Marlene’s smile was erased, “No.”
Sheila’s smile spread to her eyes and she leaned toward Marlene conspiratorially, “Oh come on.  An attractive young woman with her own successful business?  No Romeo’s pining away for you?  You can tell me.”
Marlene’s face closed abruptly, and she ground out, “No.  There was a guy I met on the dig all those summers ago, but he went to Arizona State and once the summer was over the romance was over too.  Guess he found a cheerleader he liked better.”

It got over 45 degrees today but the wind was up so opening a window was chilly.  Boo!  I have high hopes for tomorrow when it's supposed to be near 60 degrees.  Then rain on Monday and maybe a rain and snow mix for Wednesday.  Yippee.  I think Mother Nature needs a timeout.

This should be an interesting week--there's a full moon, Daylight Savings Time starts, and Friday is the 13th.  I'll be under the bed.
--Barbara
Posted by Barbara at 9:09 PM

I'm with you on the subject of DST. Slept so late this morning that my usual routine was disrupted. A creature of habit like me does not adjust well. Oh Marlene. She's doing everything wrong if she wants to keep out of the spotlight on the murder investigation. What a shame she's still so bitter. At the same time, that reporter was a little aggressive -- especially asking her age. That's such a no-no in any setting. Love those daffodils. Just looking at them has got to lift your spirits -- at least a little bit.