... in this to be falling into cabin fever.  I find myself doing things slowly, deliberately which isn't the worst thing in the world.  Today I cut out and sewed up a couple more masks, this time with wires in the nose area.  One is more successful than the other but they're both okay, I think.  I'll cut out a couple more tomorrow and sew them up.  I'd have made a third one today (it's cut out already) but I would have had to change the thread in my machine from white to black and that just seemed like too much work.

Maybe I'll get outside to rake leaves a bit tomorrow if they've dried off after yesterday's rain. 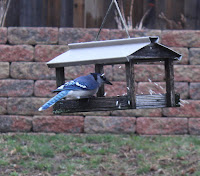 Today I had a bluejay visit.  If you look closely you can see the spray of white safflower seeds that it flung around.  I do not know why it didn't stop at the peanut wreath instead.  They don't fling peanuts.

This evening I got to work on March Preemie Hat #3.  I suddenly noticed the date and realized that I've only got two of my usual four monthly preemie hats made and there's only 5 more days of March.  I'll manage.

Detective Archibald turned to Lt. Graybow.  “Len, call the county mental health.  We can’t take her to jail like this.”  Graybow turned toward the kitchen where the phone was, then turned back to his partner.  “I’m sorry if I helped her.   She seemed so all alone.  I’m sorry, Marlene, I didn’t mean to hurt you either.”  He looked at the crying, babbling woman on the floor.  How could he have ever thought he might love her?  He shook his head and went into the kitchen to make the call.
“Are you all right?” Archibald asked Cecilia.  He made no move to help her up, afraid that Marlene would hurt herself or someone else.  He reached for his handcuffs on the back of his belt and gently snapped them onto Marlene’s wrists.  “It’s all right, Marlene.  You’re okay now.  They’re all gone.  You can relax.  We’re going to get you some help.”  He kept his hand on Marlene’s shoulder as they waited for someone to come from mental health.
Cecilia got up from the floor and sat on the couch with a sigh.  She reached for a napkin to stop the bleeding of her hand.  She kept her eyes on her hand as she said, “I never thought she’d hurt me.  I thought we were friends.  I only wanted to help.”
Graybow walked through the room without speaking and went downstairs to await the ambulance that would come to take Marlene away.
Soon Cecilia could hear sirens in the distance, getting closer and closer.  The sound reached a climax as they arrived at the bookstore.  Cecilia could see the blue and white lights of the police cars and the red lights of the ambulance shine on the windows.  She sat quietly on the couch as the sound of voices and feet reached her.   Through the store and up the stairs came more policemen, a team of evidence technicians, and paramedics arrived to begin their work.  She watched silently as Marlene was strapped to a gurney and taken away, still spouting her venom.  The evidence team methodically went about their business, picking up the pieces of the flint knife, going through the apartment looking for evidence of the three murders.
One of the paramedics returned to the room to have a look at the cut on her hand.  “You’d better have that stitched, ma’am,” he told her as he wrapped it with gauze and secured it with tape.
“Thank you,” she murmured.  Cecilia was fascinated to watch Alan at work.  He directed the man and woman gathering evidence, spoke at length with the paramedics, and consulted with Lt. Graybow.  At one point he took Graybow into the hall, Cecilia hoped to reassure him about his mistake of being involved with a triple murderer.
After everyone had left, he came and sat next to her on the couch.  Archibald put his arm around her shoulder and helped her to stand.  “You need to come down to the station with me and give a statement.  I know you’re tired and want to go home but it’s best if you do this right away while it’s fresh in your mind,” he gently told her.  Then he put his arms around her and held her close.  Cecilia felt her muscles begin to relax and she pressed her face into his warm chest and began to cry.  Archibald held her in his firm arms, stroking her head and whispering reassurances until she felt able to control herself.
“It’s just an adrenaline reaction.  You’ll be fine now, little lady,” he told her.
“Don’t call me little lady!” she admonished him with a shaky laugh.  “I’m not your little lady.”
Archibald looked down at her and smiled, “I hope you’ll be my little lady one of these days.”
Cecilia smiled up at him, turned and picked up her purse, and they left the apartment arm in arm.


And that is The End of my very first attempt at writing.  That also concludes the manuscripts I'm willing to slap on here which means that before I go to sleep tonight I have to figure out a prompt to write so that there'll be writing to put on here tomorrow night.  Just what I need, more "should"s.

I got my absentee ballot today.  The only hitch is that I need someone to witness my signature on the return envelope and there's no one here but me.  I guess I'll ask a neighbor to sign for me--from a distance.  What a pain.
--Barbara
Posted by Barbara at 10:32 PM

Those masks are cute -- and I'm almost ashamed to write that. Too bad it's come to that. I'm going to miss reading your short stories. Maybe you can begin one about being quarantined during a pandemic! But your blog is already that. And, as you know, I love reading a chapter of your life every morning. It's a challenge to fill the days.