D'you know how frustrated you get when you finally get the box of ornaments and lights up from the basement, then move all the plants and pictures into another room, and put the tree together or plug in strings of lights only to have the lights mostly not light?  You swear a little, throw them away, and go buy more.  It's expensive.  I've been there too but a few years ago I saw a TV ad that changed my life.  No, really.  This is what the tree looked like when I first plugged it in tonight.  Only about 25% of the lights lit, maybe not even that many.  So I unholstered my secret weapon, the Light Keeper Pro, followed the directions and PRESTO! the tree was lit.  (the incandescent fixer is $20 at Target and Home Depot--looks like they have one for LED lights too)  I need to get more replacement bulbs for the burned out ones but the great majority of them lit which is a good thing because if the lights are busted I need a whole new tree and these wire trees aren't easy to find anymore.  God forbid I have to go back to having a real-looking Christmas tree.  I like that I can see all my pretty ornaments on this wire tree and no fir trees were harmed in the creation of this decoration. 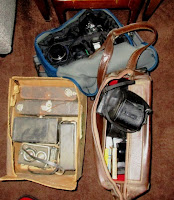 This morning I tossed our first generation Panasonic VHS Camcorder and our third generation JVC Compact VHS Camcorder straight into the garbage.  No one wants those, not even for parts.  I kept the digital camcorder because the batteries charged up and it worked.  But I kept all of the SLR cameras, lenses, and the box of vintage cameras I found in the front closet.  (looks like I should have dusted them before I took their picture... oh well)  I've got a shelf downstairs where I'm putting things that I can't immediately toss or donate. I'll probably get rid of most if not all of those things but only after some deliberation.  I think I'll clean up and offer the vintage cameras for sale in lots so if someone wants one of them they have to take them all--for a reasonable price, but I don't know if I'll sell that tiny spy camera.  I want to keep it just because it's so little, cute, and James Bond-ish. 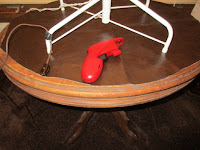 and fries lunch at Sidekicks in DePere.  Most of us have the $4.99 cheeseburger special and the waitress is amazing.  She doesn't write down our orders (there's usually 9-12 of us), remembers who gets what, and remembers what we order from month to month.  She even remembers that I don't want salt on my fries.  Actually talking to RVC (I don't know her married name) about putting up the Xmas tree and finding out that her husband bought her a Light Keeper too is what motivated me to haul all my stuff up and get the tree done.  We were exclaiming about the magic "light clicker fixit thing-y" and all the guys demanded to know what we were talking about because they're tired of buying more lights.  Maybe I should call my broker to inquire about their stock...  nah, who do I think I am, Warren Buffet?  I'd rather be Jimmy Buffet anyway.  I'm much more of a parrothead than a wizard of Wall Street.

On my way home from lunch I stopped at Camera Corner and dropped off my bin of videotapes to have them converted to DVDs.  There's no way they'll be finished by Christmas but I didn't figure there was.  It's December 3, for crying out loud.  January or February will be plenty of time.

3 December--Amelia Legrand de Saint-Aubin, Portrait of Michaela Almonter y Rojas, Baroness Pontalba.  How long had she sat there?  Her neck and shoulders were bare and a draft kept playing across her back.  It felt as if someone or something was breathing behind her but the artist was adamant that she not move a muscle.

I had more to say about that painting, really I did, but those few words staggered across the lines and after them came a sleep squiggle.  I don't remember more than the first "deep breath" of the guided meditation I listen to when I turn out the light.  Guess I was tired.  I'm kinda tired again.  It's tiring keeping moving so that I don't sink into a pit.  Day after day, just keepin' moving.
--Barbara
Posted by Barbara at 11:11 PM

I love your tree -- especially when it's all lit up. And good to have a testimonial from a trusted relative about that light fixit thingie. When I've seen the ad on TV, I've been skeptical but your blog is proof that it really works. Our tiny tree is so cute. I had to put those little fairy lights on it. But my favorite is that teeny tiny Nativity Scene. Still have to put up the "real" Nativity. That's today's project.