A Weekend To Remember

What a great weekend we had!  You can probably tell because I haven't blogged since Friday.  I'll fill you in while I do all the dirty laundry from North America and maybe a few developing countries too. 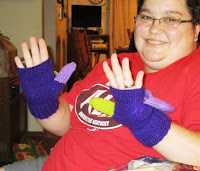 The Kentucky "kids" arrived on Thursday evening and we finally got to meet GC, our new big grandson and, I have to say, I liked him the minute I laid eyes on him and loved him wholeheartedly by the end of the weekend.  He's a typical 18-year-old with an endless appetite and ocean-blue dyed hair; he's sweet, funny, polite, and a joy to have around.  (He likes to read books too.  Score!)  On Friday we visited and ate and visited and ate while it snowed to beat the band.  DD took them to Kroll's for lunch (because there was a home game right across the street from the restaurant on Saturday) and then for a bit of a city tour.  GC asked if we could Christmas that night since the suspense was killing him.  Hey, I have a devil of a time waiting too so I said "yes!" immediately.  We had supper, I went

to Friday Night Knitting for a couple hours, then we opened gifts when I got back.  DD loved the replacement flip-top mittens, SIL1 was thrilled with 2 pints of homemade sauerkraut, and I got the Flying Spaghetti Monster Hat for the year.  The FSMH was something I crocheted about 10 years ago with the idea that it'd be a traveling talisman passed to the family member who needs to have a good year.  It's intended to be a smile-generating reminder of the support and love of the whole family for the year and then be passed on to the person you judge to need a "good hat" the next year.  There's a card with the mission statement on the back, hat graphics on the front, and the names and dates of the recipients inside.  This 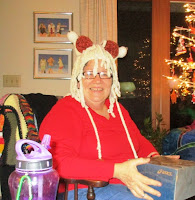 year the hat came to me in a box that's stained with soot from DD's house fire in June.  They offered to find a new box for the hat but I clutched the sooty box to my bosom and told them not to be ridiculous; that it's the perfect box for the FSMH. 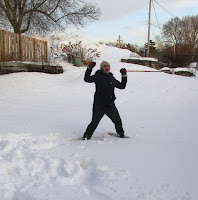 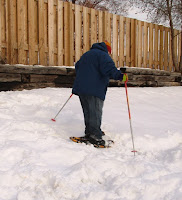 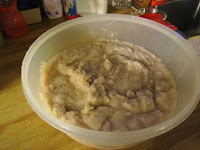 On Saturday there was that Packer game in town (no flyover in the clear blue sky either; what a gyp) so while Durwood, DD, and SIL1 hunkered down to cheer on the team, GC and I fled.  We went to a newsstand looking for alternative magazines (and found none), then to Barnes & Noble where we found treasures, and to Michaels to spend our 50% off anything not on sale coupon.  The best part was riding around with my new grandson getting to know him better.  After the game all but Durwood bundled up and went outside to play in the snow.  I took my snowshoes out to clomp around in and let other people try.  GC, being a southern boy, was less than thrilled about being dragged into the land of cold and snow until they made snow angels on Friday night and then played in the snow on Saturday.  He coerced his parents to go out and play again on Sunday morning.  The southern boy did know how to do something that I'd forgotten about and no one else had heard of.  He asked for a big bowl that he filled with pristine snow, then stirred in milk (part chocolate milk), vanilla, and sugar to make snow cream.  Yum.
Yesterday the whole family got together for a lovely Christmas supper at DS's house.  When we were leaving we realized that it was raining and it was cold enough that it was barely freezing on the pavement.  Yikes.  Fortunately this morning dawned sunny, bright, and over 40 degrees so Durwood and I didn't try to keep the KY kids here until the roads got better. 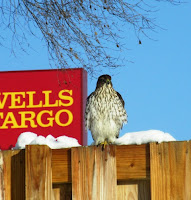 The hawk has stopped by at least once a day for the last week.  His/her continued presence is keeping the birdies away and making the seed last longer--but I miss the birds.  Pretty soon I'll find a used Christmas tree on the curb nearby, stuff it into the back of the van, and bring it home for the birds to hide and shelter in.  Hopefully that'll bring them back.

I haven't written one prompt since Thursday night and have barely knitted.  There were too many people to talk to and get to know for me to be distracted by knitting.  Now that they've driven away *sniff* prompt writing and knitting will commence.

Back to the laundry.
--Barbara

I'm glad you had such a nice time visiting. I'm glad they were able to come from KY to visit