So I Won't Lie 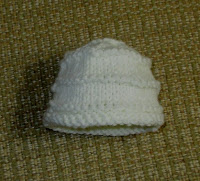 When I went to bed last night I was six rounds from being done with the white Too Early Birthday Preemie Hat and when I blogged yesterday I assured my legions of readers that I'd finish it today.  So after supper I planted myself on the couch and finished it so I wouldn't have to lie to you all.  May I say that it is singularly difficult to photograph a solid white knitted object. 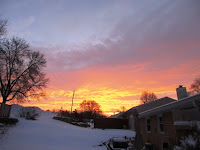 The sky this morning was gorgeous, well worth shoving my feet into my boots, zipping up my hoodie, and going out into the backyard to snap the pretty sky.  Yes, I had on pants.  I learned my lesson on April 1, 2016 when I slipped on a frozen rag rug, slingshot-ing my left slipper into the middle of the yard, and breaking my ankle while wearing only a camisole, hoodie, and underpants.  Nope, not doing that again.

When I turned back to go inside I liked the way the snowy chair, pots, and birdie tree looked 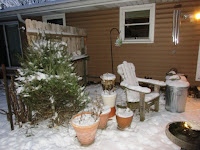 so you get to see that too.  It's cold here, no surprise it being winter and all, and I'm glad there's snow even though it's marginally annoying to have to shovel the driveway but I'm grateful that there aren't sidewalks on our street so I don't have to shovel those too.  Of course if we get more than a couple inches of the fluffy kind of snow or any of the wet, heavy stuff there's always my trusty red snowblower so I don't break my back or any other bones.  I find I'm kind of in favor of them remaining in one piece.  You know, I always thought that it'd be romantic and kind of fun to have a broken arm or leg and get to lie around being waited on and watching a lot of TV or reading.  Nope.  Not even close.  It's painful and boring and frustrating... did I mention painful?  My advice?  Avoid it at all costs.  Hire a kid to sprinkle salt in front of your path when it's slick so you never kah-wang your slipper out into the yard and end up sitting on an icy rug with a broken damned ankle on April Fool's Day.  (where did all that come from?  sorry for the minor rant) 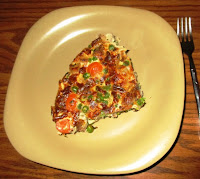 Last week I got two new WW cookbooks with recipes from the new Freestyle plan so I've been paging through them, finding all sorts of yummy things to cook.  Tonight we had Pea & Cherry Tomato Frittata into which I stirred the leftover pork chop meat from the weekend.  Yum.  Durwood, who is a big fan of gravy, thought it was too dry so I heated up part of a jar of beef gravy for him to slop over the top of it but it was just right for me.  Because I cut the frittata into 4 servings instead of 6, it "cost" 2 points and adding in the pork added 3 points which adds up to a grand total of 5 points for a delicious supper.  I'm happy to say that we'll be having it again tomorrow.

January 17--Flat Sea Biscuit.  The water felt cool on her heated skin as she waded in from the beach.  The waves were small and felt like soft hands pattering her as she got into water over her knees.  She put on her fins, then her mask and snorkel, and slid under the surface, feeling the cool water close over her head.  She was instantly in another world.  Traffic sounds disappeared as did human voices.  Now she heard the far-off buzz of a boat motor and the crunch of parrotfish taking bites out of the coral.  Sand dollars or sea biscuits lay on the sand like bread crumbs leading her to the darker blue of deeper water where the silver blades of barracuda patrolled the drop-off.

Man, what I wouldn't give to be standing on the beach, fins and mask in hand, ready to wade in.  Ah well.  We got an email from the outgoing president of the knitting guild the other day saying that the woman who had done the newsletter wouldn't be doing it anymore and I found myself emailing her this morning and volunteering to take it on.  As if I don't have enough going on, but it's only once a month...  Famous last words...  Tomorrow night's the meeting and I intend to inform the membership that the submission period is severely shortened and that I expect to hear from all of them.  If I have my way their days of inactivity and "let the other woman do it" are coming to an end.  I has spoken.
--Barbara
Posted by Barbara at 10:34 PM

If something has to be done, ask a busy person to do it. Of course, you volunteered to take on the monthly newsletter. Just another item for your Bullet Journal. I hope your friends give you a big round of applause. Thank You Very Much!!!