No, I didn't have a car accident.  I had a list of 3 stores to go to today and I had a check to deposit at the bank.  I meant to stop at the bank first because it's a mere block away but the renter's pickup truck end is at the very end of the driveway so it's almost impossible to back out and turn the van to the right without clipping his bumper so I can go uphill, around the corner, and over to the bank.  So I turned to the left, went downhill, and promptly forgot about going to the bank first.  Which meant I had to move the endorsed check and deposit slip out of the outside pocket of my purse and into my jacket pocket for safety.  I went to Walmart, then to Sam's, and was roasting by the time I got out of there because it was over 40 degrees, I walk at a good clip, and I've always gotten hot easily. (no, potty brain, not that way--jeez)  So I took off my coat but didn't want to have the check and slip in the back seat so at first I put it into the pocket of my shirt but when I got out of Pick 'n Save (why yes, I did go to three food stores) and slid my hand into my shirt pocket I was horrified to find the pocket empty.  I looked under the van.  I searched all my pockets--jeans, coat, shirt, nearly dumped out my purse, rifled my wallet, nothing.  I went back into PNS, retraced my route, asked the service desk if anyone had turned it in.  Nothing.  I drove back to the parking lot lane between Walmart and Sam's, remembered which parking place I'd had (a lost glove and someone's ashtray emptyings clued me in) but nothing.  I checked in a couple stores to no avail but decided that whoever found them saw that the check was endorsed and planned to cash it.  I was sadly thinking of the $25, how I'd need to call the person who issued it to stop payment on the check (which costs the moon and I'd have to pay), when I looked up at the visor (still sitting in my parking place), and saw that I'd taken the check, etc. out of my pocket and slipped it under the garage door opener for safekeeping.  That's when I leaned forward and lightly hit my head on the wheel.  Several times.  I was sorely tempted to stop for a celebratory ice cream cone but I didn't.  I've decided to take my devotion to WW one day at a time; today is the third day of writing "stick with the plan TODAY" in my Bullet Journal in the morning and I have to say that it's working better than I thought.  Proof that I can do (almost) anything for one day. 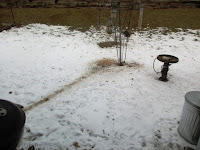 to eat.  See that angled path coming from the lower left?  That's the rat path.  It's a big rat.  A Chihuahua of a rat.  I've set traps baited with expensive peanut butter and sprinkled with cracked corn but had no luck.  We got an email from the neighborhood president with the letter he got from the city's rat patrol about how they plan to attack the rat problem come spring.  I know I need to tidy up some stuff I have "stored" (a euphemism for "piled up") around the shed but it's frozen to the ground at the moment.  I'm not stopping feeding the birds just to get rid of the rat and I'm not putting out poison.  If I can tolerate the squirrels, I guess I can put up with a rat.  For now.  I know some people keep rats as pets but that is so not going to happen. 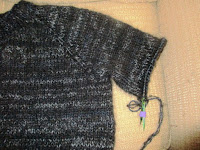 See this?  I need to knit two more rounds of Black & Blue Shrug sleeve, then knit 1 1/2" of ribbing and the first sleeve will be done.  One more sleeve to go.  (yes, I kept detailed notes so that sleeve #2 matches sleeve #1; I'm not making that rookie mistake--again)

My assistant mentioned a few weeks ago that he needed some slippers at Meemaw's house and his wish is Meemaw's command.  I found these for five bucks at Walmart.  He loves them, calls them his Happy Monster slippers.


January 20--John Singer Sargent--Padre Sebastiano.  For a man of the cloth Father Matt sure was messy.  His office looked like a whirlwind had just blown through and Julia could tell where he'd been in the rectory by the trail of paper scraps, empty coffee mugs, and pens.  She started hitching a plastic grocery bag to a belt loop of her jeans so she could gather things up as she went.  It was Tuesday afternoon which meant that Father Matt was off visiting the old and sick parishioners.  That meant Julia had three good hours to get things done.  All that ended when she saw the shoes sticking out from behind the sofa in the study.  She'd know those unpolished shoes with the scuffed toes anywhere.

In one of my new WW cookbooks I found a recipe for chicken breast cutlets in a balsamic and tomato pan sauce with capers and rosemary that I'm making for supper.  It looks and sounds wonderful.  I think it should be a law that all cookbooks need to put in a picture, even a small one, of each recipe.  I find that I'm more apt to make a recipe with a picture of the finished dish even if my rendition of it doesn't turn out exactly like it.  So I'm off to study the recipe and clean some fresh broccoli to serve alongside it.  Ta-ta!
--Barbara
Posted by Barbara at 4:52 PM

The saga of the "almost" lost check. All that fretting and stewing and running around and it was in a really safe place all along. But don't you wonder how you can do something that requires thought and effort and then instantly forget you've done it? You did have a lot to do and different places to go -- and your neighbor's truck parked in your way -- so you had an excuse to be a little forgetful. And it ended right! Yay. We had a rat sighting in our front yard the other day too. It must be rat season.