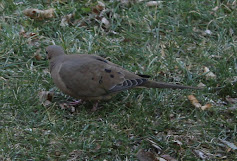 One.  One Mourning Dove was the only bird at the feeders this morning.  And it wasn't on any of the feeders, it was on the ground pecking at cracked corn.  Usually there are five or six doves here at any one time.  Not today.  There were no Sparrows, no House Finches, just that one dull gray Mourning Dove.  Also I think I missed a picture of the hawk at lunchtime.  I saw a big shadow go across the grass from the fence to the roof and I missed it.  Dang.  Probably explains the lack of birds.

A different squirrel was at the suet today.  (I can tell them apart by their tails.)  Anyway, this one sat on top of the feeder and leaned down for a bite then sat up straight to chew and swallow before leaning down for more.

The Christmas cactus flowers are starting to open.  Well, one is.  The other four are taking their time.

I finished up the latest cast sock.  I got the knit 2, purl 2 ribbing right this time so it was easier to decrease for the top.  I dug out some other colors of yarn to make more.  Like I said, this is about my speed lately.

I should have known that it was too good to be true that my dealings with the Anguilla Customs agent up to that point had been smooth.  The very next morning after Iggy and I had supper in the courtyard behind Sydans things fell apart.

Iggy was pleased when on his second day working in the container Mr. Gomez gave the okay for us to begin taking electrical items out to start work on the hotel as soon as he had cleared them.  We had begun some of the prep work in the kitchen before Mr. Gomez arrived that day.  He stepped into the room as he had done all the other days, to say good morning and to let us know that he had arrived.

Iggy and I were laughing over a tricky and slightly stubborn connection he was making when Mr. Gomez stormed in, his face deep red and his forehead looking like ten miles of bad road.

"I cannot believe it, Ignatius.  I give you an inch, against government policy I might add, and you take a mile.  Two miles, by the looks of it."

We stopped laughing and looked at each other like children caught being naughty.  "What do you mean, 'Nando?  I have not touched anything that you have not cleared," Iggy said.

I saw Iggy's muscles tense and I heard him draw in a breath to fire back at the customs agent.  I put a hand on his arm and whispered, "Remember he has the power to lock up all our building supplies, Iggy.  Let him rant until we find out what the problem is."

Some of the tension went out of Iggy's arm and I felt safe enough to let go and step toward the angry customs man.  "I'm sorry you think Iggy or I overstepped your permissions, Mr. Gomez.  Please tell us what's happened and perhaps we can help to fix it or make things right."  I took another step toward him.  "Neither of us would ever knowingly do anything that would endanger your job, you must know that, especially Mr. Solomon who has been your friend for years."  I was using the same voice I had used when Will and Marie were on the verge of a hysterical tantrum, the one I've heard police use when trying to diffuse a situation on a television show.

Gomez took several deep breaths and closed his eyes.  I could see the effort that it took for him to get control of his anger.  It was a few long minutes before he opened his eyes and his gaze bored into Iggy.  "When I opened the container this morning all of the contents were in a jumble.  The neat and tidy organization that I had made so that I could see at a glance what had been checked and what still needed attention was destroyed."

Cold dread slammed into the pit of my stomach.  Had someone broken in during the night and made off with some of my carefully chosen and desperately needed supplies?

Today's toss was a few more knitting books.  Man, I have a lot of those.

Yay for the brave Christmas cactus. I hope all those buds hang on and turn into blossoms. So many times in the past, mine have just dropped off. Thanks for the close-up shot of the solidary bird today. I think your idea of an ominous hawk is probably why the rest of the birds took cover.